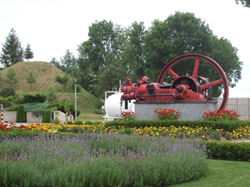 We are a fourth generation which keeps the family milling traditions alive. The good reputation of our products is the result of the implementation of modern production technologies, proper selection and storage of raw materials as well as professional passion.

A new mill was built in April 1992 with a production capacity of 50 tonnes per day. In 1999 a complex replacement of machines and devices of the wheat mill and the adjacent infrastructure began. The modernization included a cleaning room and the wheat mill. A modern mill by the Swedish company Buhler was installed. The production capacity increased to 150 t/d. An up-to-date electronic equipment was implemented that included control of the operation of the cleaning room, the mill itself and a packing unit as well as their computer visualization.

In 2005 a decision to further modernize the site was made. The retrofitting consisted in the expansion and modernization of the mill’s third section– the packing unit. A system of flour storage as well as composing intermediate products and their packing and dispensing was expanded and improved. A storage capacity for 3600 tonnes of flour in 24 chambers was built. The total height of the storage tower is 48 meters making it an interesting landmark and a viewing point of the surrounding area. The chambers were made of concrete using the moving formwork method called “a slip” for short. The premises were officially put into operation in August 2006. However, the modern packing unit was not the last investment since in April 2009 a new Buhler rye mill with a capacity of 150 t/d was inaugurated. As part of the investment, aside from the technological lines, a specialized laboratory for investigating quality parameters of the flour was purchased. It should be added that the laboratory equipment includes, among other devices, farinograph and extensograph.